So, I took a little trip this past week. It was absolutely awesome. I haven’t had a real vacation in about four or five years, so it was much needed. My trip involved a 13 hour train ride to upstate NY, a family reunion, Megabus down to the City, a train ride out to Montauk, and finally a train and plane back to Chi-town. 22 hours of traveling right there people!  I wont bore you with all the details of a family reunion where my Dad’s side of the family has 11 kids and over 30 grandkids, and currently 3 great-grandkids with another on the way. But it was fun in that sorta “Why aren’t you married and having kids of your own Jami?” kind of way. Once I left the reunion to bus it down to NYC, I enjoyed some nerd related activities. Here are a few of my nerd highlights. (above picture taken by Sara H.)

During my one day in New York City I wandered over to Central Park for several hours and even made it to The Met, so awesome!And who did I find in Central Park? But Alice sitting on a mushroom and talking to the Mad Hatter.

It was fun to see the kids climbing all over the statue, excited to see a character they recognized. I was just as excited, but too dignified to climb up on the toadstool. The next bit of fun was taking pictures of some more amazing statues in The Met. I just love the curves on this one. ;D

And the curves on the swords were amazing too. I was struck by the fact that everything I create will degrade over time, there is little hope that anything I produce will be so concretely available in the next four thousand years. Another thing I found fascinating were all of the transported rooms. I can assure you, no one will be transporting my room anywhere.

After spending a lovely day walking around NYC, I hoofed it out to Montauk on the LIRR (Long Island Rail Road). The picture to the left is me on a train. Looking as tired as I felt. But, I was soon distracted by a sign on the train (picture to the right), that I found to be especially funny, but maybe that was my overwhelmed, trip addled brain talking. Finally I made it out to Montauk.

The next day my best friend and I got up rather late, and after doing some yoga, we biked out to the Montauk Lighthouse and took pictures along the beach. It was a long bike ride, an estimated 15-18 miles. So the yoga before hand and after was good. Very good. My camera died while I was on the train taking pictures of the no boom-boxes sign, so the rest of my pictures were captured on my cellphone.

And somehow I forgot to capture the actual lighthouse, but below is a picture of the beautiful beach. It was so amazing, that my BF and I got up one morning at 4:15 (well, she got up at 4:00), to take our packed bag of extra clothes to the beach and take pictures as the sun rose over the water. Yes, we are those kind of people. I have to say, it was awesome! The sun, seagulls, and laughing with my best friend made for one of the best mornings of my trip (even thought I got a scraped knee and palm and a weird bruise on my hip). Plus, I got some awesome pictures. The photo posted before the break came from the sunrise photo shoot. 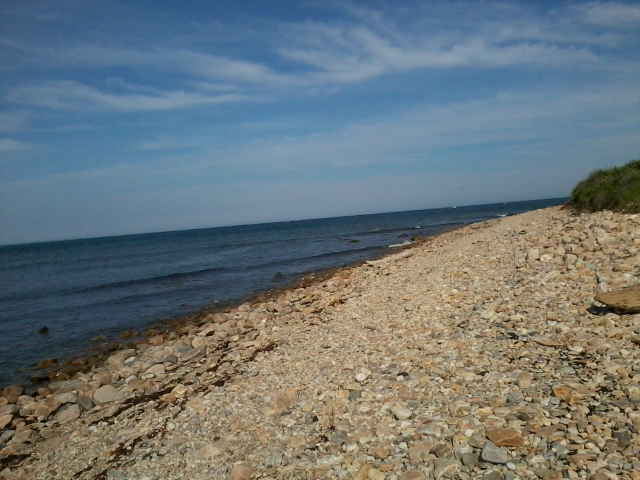 After the day biking we decided to do something more relaxing- shopping (twist of irony here, I hate shopping). So, the next morning we drove through The Hamptons and landed in Southampton. The picture to the left is my “automobile” picture. (The only thing I didn’t capture was the plane ride. I was too busy watching Mike & Molly on Jetblue’s seat screen to bother the person next to me with bag reaching, bag spilling, over self absorbed plane pictures.) So Southampton shopping… yah. Well, I’m not the biggest fan of shopping especially not for t-shirts that cost more than my entire outfit combined. But I did enjoy proudly wearing a Superman belt while brushing past the oh so chic ladies of the East and giggling that they probably didn’t even notice.

While walking around Southampton, we stumbled upon the Parrish Art Museum. We were running low on time, so we didn’t make it inside the art museum. But we did take some pictures of Greek figure heads displayed out on the lawn. After returning back to Montauk and fixing a quick dinner we headed out to the local cemetery and an overlook which had a view of three different bodies of water, Fort Pond Bay, Fort Pond, and of course the Atlantic Ocean. We stood there taking pictures of the setting sun and I couldn’t imagine being anywhere else. I was sad to leave the days of yoga, running around to book sales on the lawn (picked up five new books for $3.50!), and midnight swims in the pool out back. But, back to work I go, back to the blah gym and watching as my tan fades away from too much time indoors.

One thought on “Planes, Trains and Automobiles”