Noel Clarke played Micky Smith, not quite a companion, but he was instrumental in several story lines and alternate universes. He started off as the ex-boyfriend of Rose Tyler and became so much more. Micky’s stint on the series started with the 9th Doctor Christopher Eccleston, who lasted or was contracted for only one season of Doctor Who. Not as pretty at Tennant, he is often overlooked, but his stint was pretty brilliant bringing back the whole series with a bang and a big smile.

Then came David Tennent as The Doctor, and everyone fell a little bit in love with him. Including his companions. But he seemed to hold it over them that he could never be had (even though several times we find out he was married or had children. Finally a version of The Doctor is allowed to be with Rose Tyler in an alternate universe because Doctor Donna OKs it. I thought it was weird way to go about leting her have the Doctor, but not really. This is my main beef with Tennant’s Doctor, he was just too pretty and too much of a tease. I really only enjoyed his stint as The Doctor when Donna showed up. She didn’t fall prey to his looks, but stood up to him, and teased him. Plus, I have a little crush on Catherine Tate. 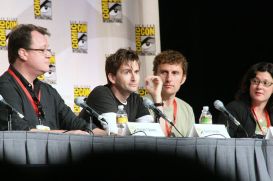 John Barrowman showed up on Doctor Who as a sexy sky captain in an invisible dirigible. Captain Jack Harkness was a funny flirty character who  eventually went on to star in his own spin-off series, Torchwood. I actually watched the first three seasons of Torchwood before going back and getting into Doctor Who. So, I’m a fan of both series. 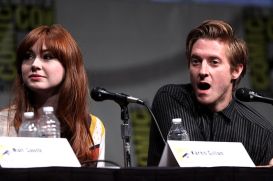 By Gage Skidmore from Peoria, AZ, United States of America via Wikimedia Commons

One man did finally make it to companion status, Rory, also known as Mr. Amy Pond.None too happy with Amy’s infatuation, Rory follows Amy on her adventures with the Doctor. Played by Arthur Darvill, Rory begins to have a more interesting and exciting part in the plot as the series progresses, finally finding his feet as a full fledged companion and being one of the most awesome characters in the Who Universe. I love Rory, he is steadfast in his loyalty, never looses sight of who he is, and makes many tough decisions. Aurthur Darvill brings a depth of character to a companion who could have gone through the entire series as Amy background boyfriend with the nose.

But, by far, my favorite Who Man is Matt Smith’s Eleventh Doctor. I love Matt Smith and the way that he plays The Doctor. I love that he is never a tease, and in fact, encourages Rory’s involvement, to an extent. I love that he thinks he is all knowing, and yet relies on Amy. Who aptly pointed out that Time Lord is what they are called, it doesn’t mean that he knows what he is doing. Even though most of the time the Eleventh Doctor does know what he is doing. Smith plays a brilliant Time Lord brilliantly, and he is definitely, My Doctor.

Smith is only 28, and the youngest actor to play the Doctor on television, but he does it well. I also love his enthusiasm for the series and the part. His love of the fans is evidenced by his ability to remember they exist, and he has done lovely things for them, such as bringing donuts to the opening of Season 6 in NYC for the first bit of the crowd in front of the theater. How awesome is that. Plus he has inspired such things as James Hence’s “Got Custard” t-shirt and all in all seems like an awesome person. While he may not be as pretty as David Tennant, I think his face is far more arresting and has more character, giving him an almost alien appearance and manner, making him, in my humble opinion, the perfect fit for the part of the Doctor.

2 thoughts on “Men of Doctor Who”