Due to unexpected and expected traveling with unexpected lack of internet abilities, I got behind on my Fringe reviews. Whoops. I’mma try to catch up now. But I make no promises. I have to say, that having seen most of the recent episodes (thought not reviewed them) I am wondering what all of this is leading up to. It seems a specific set up for something. But I’m not sure how all of the crossing over between the two worlds is going to affect the overall story arc. Maybe these two episodes are just fillers, but I hope not.

Everything in its Right Place

Agent Lee is feeling a little down in the dumps because Olivia and Peter are a little twitterpated with each other (remember twitterpated from Bamabi? Huh? Huh?), so when the opportunity presents itself to get away from them he takes it. Agent Broyles needs someone to head over to the other side and brief the Alternate Universe’s (A.U.) Fringe team on recent Jones sightings and happenings. Fauxlivia meets up with Agent Lee to get his report and they talk about how the A.U. is slowly starting to heal now that the bridge between the two worlds has been fixed and some places previously ambered are being decontaminated. Before they can get to Agent Lee’s debriefing a Fringe event has happened, a vigilante is killing criminals and seems to be connected to a shapeshift. Agent Lee, in no hurry to get back to his side (and I think he has a big crush on Fauxlivia) stays to help. He figures out that the vigilante is a first generation shapeshifter. You remember, the ones with the outlets in their mouths.

The hunt down the shapeshifter who backs away from killing Agent Lee and he realizes that the shapeshifter doesn’t want to be a bad guy but think Agent Jones is going to fix him. Then as they are about to transport the vigilante as a prisoner, Captain Lee (Agent Lee in the A.U.) is shot by a sniper. He doesn’t make it. This was not really a shock, I figured Agent Lee was going to be permanently in the A.U. and I was wondering how they were going to deal with the two Lees. Apparently by killing one of them off.  As he is dying Captain Lee tells Agent Lee and Fauxlivia to find out who shot him, it has to be the mole.  Using the shapeshifter, Fauxlivia sends him in as the sniper and the team learns that AltNina is the Bad Nina and she is placed in custody. Agent Lee decides to stay in the A.U.  (obviously setting up a romance here, which, fiiiine.)

Good lord, what an emotional episode. I feel that the writers are wrapping up some of the extraneous plot lines. I can only assume this is because they have something big in store for the second part of the season. I can only imagine what this is. Maybe it has something to do with Peter and the Observers, as that plot line still seems a bit unresolved. I guess we will have to wait and see.

Walter is brought over to the A.U. to help decipher why people in Our Universe (O.U.) and the A.U. are dying exactly the same. For example, a man dies in a boardroom as though crushed by a car accident, and in the A.U. that is exactly what happened to him. The problem is that accidents should not be able to cross over between the two worlds, Walter, of course, has an idea. He brings over a disembodied hand with him. Oh Walter, how I love thee. He sets a tuner and realizes that the A.U. is now on the same frequency as the O.U. and that is how things are getting messed up. 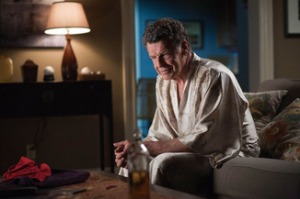 But the real story here is Colonel Broyles. Everyone on the internets has been wondering if he was a shapeshifter and that is why he has been helping Jones and Bad Nina do damage to the A.U. He is the one who let a bad guy go, and he was involved in telling them where Captain Lee was going to be, and indirectly was a part of Captain Lee’s death. He is the mole. Now we find out why, blackmail. If Colonel Broyles doesn’t do what Jones wants him to do, Jones will take away the medicine needed to make Colonel Broyles’ son better. The Colonel even has a conversation with Walter about doing whatever it takes to heal his son, and asks Walter if he would have made the same choice (remember this Walter did not fix Peter). Walter says, now that he met his adult son, he probably would go back and mess things up and damn the consequences. Fauxlivia tricks Bad Nina into implicating Colonel Broyles. How much more heartache can either of the Olivia’s take, come on already people. Does she really have to turn in her boss too. No, before she is forced to do something about it, the Colonel turns himself in. 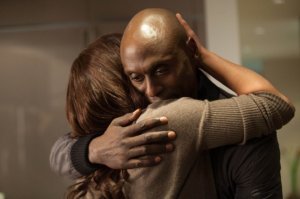 For some reason these two episodes are focused on the two sides working together. If feels like they could have been coined as Part 1 and Part 2. I’m actually glad I watched them right after the other, I think it makes this review a little easier really. But how is this a set up for more story line? Once again, the writers have brought a conclusion to an outlying plot line. Olivia and Peter haven’t been focuses on in a few episodes, maybe there is a bit one right around the corner, and they had to do scene scheduling this way? I’m not sure, but I’m excited to see what the rest of this season brings, because whatever it is, it’s some twist I haven’t thought of. I do like this show, way too much!