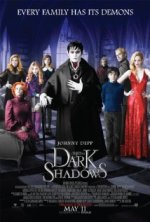 Johnny Depp and Michelle Pfeiffer star in Dark Shadows a movie based on a television show of the late 60’s. Dark Shadows is the story of a man, Barnabas, who was cursed when after he hooked up with a scullery maid/witch but spurned her for a fair haired maiden. The scullery maid spelled the fair haired maiden into jumping off a cliff and when Barnabas followed his true love off the cliff he fell into the crags only to discover that he did not die because he was…. a vampyre (think Andrew in “Storyteller” in season seven of Buffy the Vampire Slayer). The witch formed a mob of the towns people and they stowed Barnabas away in a coffin and buried it underground.

Fast forward to the 60’s. Barnabas’ descendants rattle around in the grand old mansion Barnabas’ parents built. They’ve closed off most of the rooms because they can’t afford to heat them. Enter Victoria, or so she claims to be, a brunette with big eyes who arrives in answer to a post in the newspaper advertising a governess position for a little boy who sees ghosts. The family business, owning fishing ports, is going down the drain because a big head honcho Angelique has been buying up the ports and taking over their business. Barnabas’ coffin is uncovered during construction on the land and he awakens and bloodies his hands, and mouth, with the lives of the construction workers before hunting down his family. Though he swears he wont harm them.

Instead, he goes about revitalizing their name and business. As part of his revitalization he confronts Angelique, who turns out to be a figure from his past. His descendant Elizabeth Collins Stoddard, played by Michelle Pfieffer, is mother to a rebellious teenager and aunt to the ghost believing nephew. She is trying to hold down the fort and deal with Barnabas’ arrival with as much grace as she can muster. Barnabas is enchanted (in the normal sense, I think) by the governess who bears some relation to his dead fair haired maiden. Then his past looms up to destroy him.

With the help of several drinks at my local theater (they have a liquor license, it was perfectly legal) and having only spent $5 on a matinee I giggled my way through the movie. Due more to my slightly sober state, than the movie. In a word it was, OK. Not nearly as campy or as funny as I thought it would be. There was a whole lot of melodramatic acting which is only giggle worthy for a short time. Johnny Depp was how Johnny Depp always is in a Tim Burton film. Quirky, white faced, with lots of hand gestures. Michelle Pfeiffer was, as usual, excellent. The story line went along as expected until the last five minutes and then…. W. T. F?

And I don’t think it was because I had had something to drink that I didn’t understand the sudden turn in plot line. Additionally, the $5 dollar payment and drinking did not excuse a noticeable plethora of plot holes. Which would have been OK if there had been some sort of meta acknowledgement about them. Instead it was just more melodrama. How did Barnabas have descendants that survived if his parents were killed off, he was the only kid, and he died/became a vampire before having any children with the fair haired maiden? (If they had kids at some point, this was never explicitly explained.) The whole premise of the movie is based on something that makes NO SENSE!!!! Furthermore, the continuity in the universe as relating to vampire mythology is completely lacking. At one point the only way to be turned is to drink the blood of the sire and then the next there is no need to turn. I don’t really care how a person sets up their universe when it comes to vampires, mythological creatures after all, be it sparkles or ruthless blood thirsty demons who can get their souls back, but I demand continuity or the premise stinks to high heaven like a rotting corpse in the Florida everglades.

Quirky, with a few giggles, Dark Shadows does not rise to the level of cult classic campy nor does it leave the melodrama behind to be a fun family film. It hovers somewhere in the middle like a vampire outside the window of a 17 year-old sour face. All in all, I was extremely glad I had only paid $5 to see the show and that I had a class (or two) of champagne to see me through.

I did have fun posing in the lobby! Though, I need a better phone camera.