Awesome Adaptations is a weekly bookish meme, hosted at Alisa Selene’s books blog, Picture Me Reading. Each week she writes about an adaptation of a book that she think is worth seeing and has challenged herself to come up with suggestions to match a category. Any format (television series, film, web series, etc.) is acceptable as long as it is based in some form on a book. Today I’m participating in An Awesome Adaptation with a Tough Heroine. 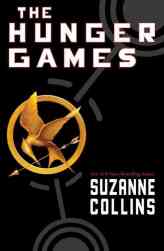 The Hunger Games by Suzanne Collins is one of the first (self identified?) YA book series that I read. It is the story about a girl, Katniss, who grows up in the hills of coal mining country (I imagine West Virginia). She spends her days scrounging and bartering on the black market for food because after a civil uprising the United States has been divided into 13 districts centered around the Capital which now controls the districts by limiting food and her district gets very little from the government. The Capital also makes one boy and one girl from each district every year fight to the death in the Hunger Games to maintain control over the districts and prevent another uprising. Plus, the winner of the Hunger Games gets to bring food back to their district enough to feed everyone very well for a year. But they have to kill all the other tributes to do so.  Katniss volunteers in the place of her sister who was chosen and must take her survival skills from the woods to the arena.

I enjoyed the movie adaptation of The Hunger Games when it came out in 2012. I thought it kept fairly close to the original story, with some minor tweaking to make it more accessible to a wider audience. Some of Katniss’ thinking and analyzing was lost, which was something I enjoyed about the book version of Katniss, but I understand as a medium movies don’t always adequately portray a character’s thinking. But I enjoyed Jennifer Lawrence’s portrayal of the character and think she did a really great job. Unlike the rest of America, I actually liked Josh Hutcherson as Peeta. (I’m team Peeta all the way, FYI. Gale chose to be in the background and talked a bigger game than he acted upon.) I’m excited to see Hutcherson in Catching Fire which is where Peeta’s development in the books really took place. I thought it interesting that in the books he’s a kind of patsy from Katniss’ perspective, it takes her a long time to see him as he really is, thoughtful, brave, and endearing. I hope this transformation is well portrayed in the next movie.

While I could have done without all the camera shaking, I thought it was a fun movie and a decent adaption. And Jennifer Lawrence is hot.

4 thoughts on “Awesome Adaptation with a Tough Heroine”