Thanks to FM for letting me know about this awesome TARDIS dress. I like the skirt part of the dress, but I do think the corset could be a little more fitted on the woman.

Peter Capaldi has been cast as the 12th Doctor, as you probably all have heard. I’ve seen him in other Moffet productions, Doctor Who as Caecilius and on Torchwood as John Frobisher, and on World War Z. None of his roles really stand out in my head, even after reviewing them on IMDB, this is probably because he becomes his role rather than just being himself in the role. Hopefully, this portends good things. But Matt Smith will always be MY Doctor. So, I would probably be as ambivalent about any new actor in the role.

My friend Stephanie B. posted this awesome picture she took on a trip to the at Yogi Bear Jellystone Park. I ❤ this so much. Thanks for sharing Stephanie!! Check out her tumblr here: http://www.retromondays.tumblr.com/. 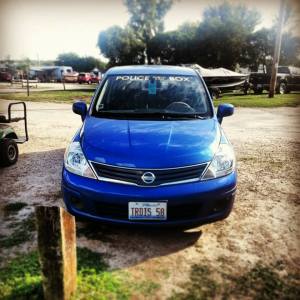 4 thoughts on “TARDIS Dress, the 12th Doctor and More”