Two years ago I discovered Rachel Caine who wrote the Weather Warden series about a universe where Djinn and humans with supernatural abilities, called Weather Wardens, fight each other over power. The Djinn were enslaved by the Wardens because the Djinn enhance the abilities of the Wardens. I read several books in that series and reviewed the first of them, Ill Wind. You can read the review here. You can read more about the Weather Warden novels on Caine’s website.

Recently, I discovered another series based on the same universe with some cross-over characters by Caine. The Outcast Season novels revolve around an outcast Djinn, Cassiel. In Undone, Cassiel is sent to earth to live among the very humans she despises so much after being cast down by her ruler, Ashan. From demigod to mortal human flesh, Cassiel has to learn how to live with her human body, emotions, and limitations while being hunted by an unseen force. 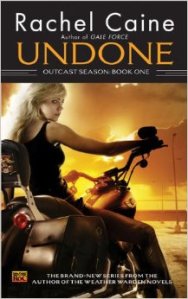 While Joanna in Ill Wind is a Weather Warden, human, trying to understand the Djinn, Cassiel is the opposite, a Djinn trying to understand humans. I was afraid that the two female leads would be so like each other as to make the two series so similar as to be indistinguishable. But, I was wrong. Cassiel is quite the character, I love her non-human reactions to things. I love how she tries to make sense of the world she has been thrown into while trying to stay aloof from the mess of knowing a human. And she fails, in the beautiful emotional sense of failing to keep emotions separate from the mess of life.

The mystery of the unknown foe was well played throughout the story as little pieces are revealed and Cassiel’s past problems hunt her down on earth. But there is more at play than past wrongs, the abilities of the Wardens are being used against them. Cassiel and her partner must figure out who they can trust while they track down kidnapped children. The action never ends. In fact, neither story is wrapped up by the end of the book and I was glad I had the second one in my possession when I finished the first. Though, that only managed to make me want to read the third as the twist keep coming and the story continues to evolve.

I wouldn’t recommend taking on this book unless you have time to take on the series. There is so much going on that very little gets resolved, but especially not Cassiel’s new found romantic interest. A hard to put down book that leads into a hard to put down series, clever, imaginative, well written, Caine’s Outcast Season novels is an unforgettable urban fantasy series.