After reading The Lost Gate, I immediately jumped back into the world by borrowing the audiobook The Gate Thief  by Orson Scott Card ,as narrated by Stefan Rudnicki and Emily Rankin, from the library. 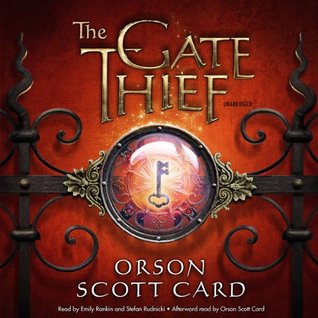 In this sequel to The Lost Gate, bestselling author Orson Scott Card continues his fantastic tale of the Mages of Westil who live in exile on Earth. Here on Earth, Danny North is still in high school, yet he holds in his heart and mind all the stolen outselves of thirteen centuries of gatemages. The Families still want to kill him if they can’t control him…and they can’t control him. He is far too powerful. And on Westil, Wad is now nearly powerless–he lost everything to Danny in their struggle. Even if he can survive the revenge of his enemies, he still must somehow make peace with the Gatemage Daniel North. For when Danny took that power from Loki, he also took the responsibility for the Great Gates. And when he comes face-to-face with the mages who call themselves Bel and Ishtoreth, he will come to understand just why Loki closed the gates all those centuries ago.

Orson Scott Card is a well known author and for good reason, his books are excellently written and The Gate Thief is no exception. As the story encompasses an otherworldly setting, a contemporary setting, and magic the scenes could get quickly overrun with bad exposition of world building, but they don’t because the author knows how to build up his characters so that they are their relationships are even more exciting than the worlds he creates. Which is high praise considering the worlds he creates are both literally and figuratively fantastical.

What I liked about The Gate Thief was that it held up to the first book and is not just a place holder in the series, the story moves forward while exploring who Danny is and who Ward is and how this impacts their interactions. There is a greater story than their present feud and only as Danny begins to realize this, and how much he must have the help of people other than himself, does he grow up and start to become the person he is meant to be.

Again, I enjoyed the two people narrating as it helps keep track of the two story lines. Both narrators are excellent and had great pronunciation and dictation as well as emotional depth in their voice acting to bring the story to life. Their voice acting ability is able to keep up with the fantastical story line and that makes them great at what they do.

I don’t want to give too much away about this particular book as it is part of a series, but I definitely recommend the Mither Mages series. I can’t wait to get my hands on the third book! The Gate Thief is an excellent tale in itself, but I would definitely recommending reading the books in order so as to get the entire depth of the series. If you like contemporary magical stories or mythical old-world stories, or want to see how than can entwine about each other, check out the Mither Mages series!

One thought on “Audiobook Review: The Gate Thief by Orson Scott Card”