I read a lot of young adult stories this summer, and I mean young adult series, not your typical 16 or 17 year old, but about protagonists who were 12, for example. InterWorld, co-authored by Neil Gaiman and Michael Reaves and read by  Christopher Evan Welch, was probably my favorite young young adult series from this year. I borrowed a copy from my library. 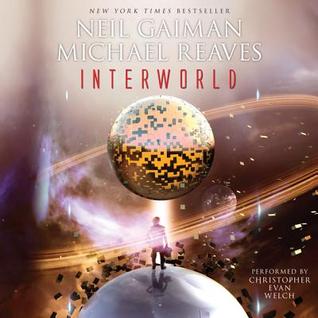 When Newbery Medal winner Neil Gaiman and Emmy Award winner Michael Reaves teamed up, they created the bestselling YA novelInterWorld.

InterWorld tells the story of Joey Harker, a very average kid who discovers that his world is only one of a trillion alternate earths. Some of these earths are ruled by magic. Some are ruled by science. All are at war.

Joey teams up with alternate versions of himself from an array of these worlds. Together, the army of Joeys must battle evil magicians Lord Dogknife and Lady Indigo to keep the balance of power between all the earths stable. Teens—and tweens and adults—who obsessively read the His Dark Materials and Harry Potter series will be riveted by InterWorldand its sequel, The Silver Dream.

I always love a good story about alternate universes and the different versions of people that can exist because a certain decision was made at a cross road in life or a specific environment shaped a person into a slightly different version of his or herself. Joey discovers alternate versions of himself that have wings, that are cybernetic, that have animal like features, all because he has the ability to slide into the inbetween and through that to the alternate worlds. Of course this isn’t all fun and games and he must use his powers to help keep the worlds safe, fight the bad guys, and use both magic and science to rid the world of evil.

I like Joey as a character, he is charming, intelligent, and acts like a 12 year old without me wanting to hit him upside the head too many times. His cleverness aids his ability to fight evil, but not always his ability to understand people or politics. He meets older versions of himself and learns from them. He has to get along with the different versions of himself, even if he doesn’t quite understand them always. He’s clever, but he gains wisdom as the story progresses, and that is a trait of a good character to me.

Christopher Evan Welch does a great job narrating. He has slightly different accents and character voices to keep the listener from getting too confused between the different versions of Joey . It works well that they are all versions of each other, because the voice over acting of one person makes even more sense in this particular story. Welch is dynamic and engaging in his story telling and I thought he did a good job.

The overall plot line is rather straightforward, having maybe one twist I didn’t see coming, but the character and world building are wonderful and engaging, in true Neil Gaiman fashion. If you like young adult series about great characters and fun worlds, check out InterWorld by Neil Gaiman and Michael Reaves.

One thought on “Audiobook Review: InterWorld by Neil Gaiman and Michael Reaves”