It’s been a long time coming, but I finally decided to tackle this series. I know so many people who love Rothfuss’ work, and I had them on my tbr pile for forever. I’m not always an epic high fantasy fan, and I dislike hating what everyone else likes, because then I just feel more weird, so I put off reading this until I couldn’t anymore. I took the plunge and, using a free credit, downloaded it from Audible. I’m happy to say that I loved it! 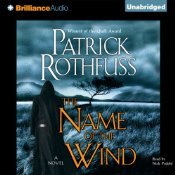 “My name is Kvothe. I have stolen princesses back from sleeping barrow kings. I have burned down the town of Trebon. I have spent the night with Felurian and left with both my sanity and my life. I was expelled from the University at a younger age than most people are allowed in. I tread paths by moonlight that others fear to speak of during the day. I have talked to God’s, loved women and written songs that make the minstrels weep. You may have heard of me.”

So begins a tale unequaled in fantasy literature – the story of a hero told in his own voice. It is a tale of sorrow, a tale of survival, a tale of one man’s search for meaning in his universe, and how that search, and the indomitable will that drove it, gave birth to a legend.

What I liked about this book was that it was stories inside of stories, which broke up the main story into intervals so that it never got boring. I devoured the tales and loved nearly every minute of Nick Podehl’s narration. This story has everything in it: mythologies that are well devolved, characters that are flawed but still likable, and an wonderful plot line that kept me enthralled.

Kvothe is not the best person in the world, he is immature, and he has been through a lot of traumatic events that have shaped who he is. He is smart without wisdom, clever without a lot of purpose except getting what he wants in the moment, and he can’t seem to take instruction unless he deems the person smart enough to learn from. The side characters are well developed and help Kvothe seem less imperfect because of their own imperfections. A wonderful cast of characters in an interesting setting.

The only thing I really did not like, was his main romantic interest. Ugh. Even Kvothe admits she is cruel, but this does not stop his attraction. I’ve met women like her and seen all the men they cut through, and it’s like the guys can’t help it, they must love these women even though they are horrible human beings. Make no sense. Though, I guess this happens to both genders, and maybe is more indicative of the one who is falling being unable to respect themselves than it is the “fault” of the cruel men and women who play with other people like they are toys to be discarded after they have lost their shine. I’m not sure why such a female has to be the main romantic interest in the story though, and in almost an homage to such females. That the main character admires her cruelty and learns how to stay in the good graces of such a toxic person was a bit disappointing as a romantic plot. I kept reminding myself, he is young, he is foolish, but that only help cool my ire a tad. Perhaps, as the series progresses the main character will learn that while toxic people can be exciting, they cannot be made whole, and they are best left to their toxic lives.

What the author is able to accomplish is a connection to characters that live outside of our timeline and universe. and that is to be commended. I felt for all of the characters, even the side characters. They have strong voices and personalities and are integral to the story line, even if they just jump in for small snippets of time.

Nick Podehl did a wonderful job of narration. His voice acting was excellent and he was able to keep the story alive in my mind. He didn’t really have different voices for the characters, but he was really good at inflection and emotion at what was going on in the story. He was easy to listen to, and as there are a lot of chapters and hours to finish the audible book this was necessary.

In spite of my dislike of one of the female characters, this was definitely one of the best books I listened to this year. I would recommend it to any one who likes sci/fi  or fantasy, or enjoys intricate plot lines and coming of age stories.

3 thoughts on “Audio Book Review: The Name of the Wind By Patrick Rothfuss”