So…. just realized I have not posted a book review this entire year. What? Some of that is because a lot of the new series or new books I was trying out at the beginning of the year did not make me excited enough about the story line to write a review. Some of it is because this year has seen a lot of changes and my reading time has diminished so I’m not reading as many books. I’m going to attempt to get caught up. (Where’s my laughing/crying emoticon when I need it?) 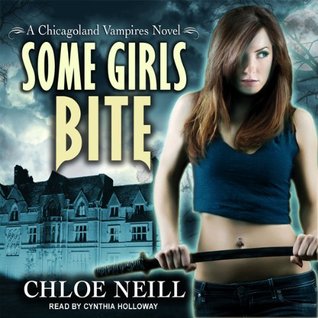 I borrowed Some Girls Bite by Chloe Neill as an audio book from my local library, it is read by Cynthia Holloway.

They killed me. They healed me. They changed me. Sure, the life of a graduate student wasn’t exactly glamorous, but it was mine. I was doing fine until Chicago’s vampires announced their existence to the world—and then a rogue vampire attacked me. But he only got a sip before he was scared away by another bloodsucker…and this one decided that the best way to save my life was to make me the walking undead. Turns out my savior was the master vampire of Cadogan House. Now I’ve traded sweating over my thesis for learning to fit in at a Hyde Park mansion full of vamps loyal to Ethan “Lord o’ the Manor” Sullivan. Of course, as a tall, green-eyed, four-hundred-year-old vampire, he has centuries’ worth of charm, but unfortunately he expects my gratitude—and servitude. Right. But my burgeoning powers (all of a sudden, I’m surprisingly handy with some serious weaponry), an inconvenient sunlight allergy, and Ethan’s attitude are the least of my concerns. Someone’s still out to get me. Is it the rogue vampire who bit me? A vamp from a rival House? An angry mob bearing torches? My initiation into Chicago’s nightlife may be the first skirmish in a war—and there will be blood.

OK, I’ll admit I picked this one because it was about vampires in Chicago. I mean what is not to love about that premise? It’s the reason I picked up Jim Butcher’s books, and I loooove those. I was also excited because this is currently a 12 book series with the 13th book to publish this year. I love finding new series and being able to binge read them. But I just couldn’t get into this book.

While there were some intriguing family dynamics that added some interest to the over all plot of girl gets made into a vampire and is trained by a really old, but extremely hot, vampire who expects submission, but Merit is a modern woman who refuses to submit, it wasn’t enough to make the series stick out from the rest of the genre. I really wish there had been a little more about the transition from being an academic whose life revolves around an all consuming thesis to becoming a vampire who has to give up that life long dream. Perhaps that is developed later in the series as sometimes it does take an author a good three books to really develop a character.

Cynthia Holloway was a decent narrator. She has a low and interesting voice. I generally do not have difficulty with narrators, I like listening to audio books and respect the hell out of voice actors. I took a class on it in Chicago and it is hard work! I do recommend listening to a sample reading before downloading and audio book if you find that some narrators turn you off the story. I do this if I’m going to buy the audio book and not just borrow it from the library.

Chloe Neill is a good writer and so this was not a bad book to read, I did enjoy parts of it, I was just wary of how much time I should continue to give the series as there were some “this has been done” parts as well. Obviously the series is popular or there wouldn’t be so many books in the series, and there are some reviews on Goodreads that suggest as a series it is quite good, so maybe I should borrow the other books in the series to see if I find the series to be more interesting than the first book.

But can we have some urban fantasy covers where the female characters are in actual fighting gear? Or even fighting? Midriffs and belly rings are hella sexy, I agree, but not exactly fighting gear. Just saying.