I borrowed the audiobook of The Aeronaut’s Windlass (The Cinder Spires, #1) by Jim Butcher from the local library. It is read by. 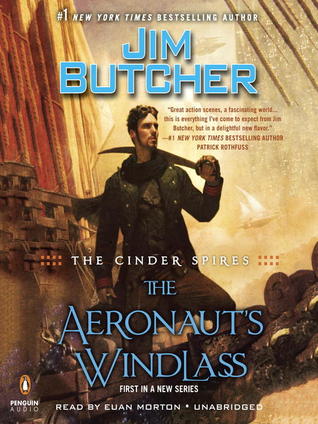 Since time immemorial, the Spires have sheltered humanity, towering for miles over the mist-shrouded surface of the world. Within their halls, aristocratic houses have ruled for generations, developing scientific marvels, fostering trade alliances, and building fleets of airships to keep the peace.

Captain Grimm commands the merchant ship, Predator. Fiercely loyal to Spire Albion, he has taken their side in the cold war with Spire Aurora, disrupting the enemy’s shipping lines by attacking their cargo vessels. But when the Predator is severely damaged in combat, leaving captain and crew grounded, Grimm is offered a proposition from the Spirearch of Albion—to join a team of agents on a vital mission in exchange for fully restoring Predator to its fighting glory.

And even as Grimm undertakes this dangerous task, he will learn that the conflict between the Spires is merely a premonition of things to come. Humanity’s ancient enemy, silent for more than ten thousand years, has begun to stir once more. And death will follow in its wake…

This book made it onto my Top Five Books I Enjoyed that were Outside My Comfort Zone in 2015 post because  I generally do not enjoy high fantasy but I ended up really engaging in this story. Maybe part of this was that it was an audiobook and I did not have to keep names straight because the narrator had excellent character voices and I followed along so much easier.

Ok, so the reason I really liked this story was that there are people who can speak Cat. No joke. It is amazing because Butcher has cat psychology and physiology down pat and brings this real world knowledge to the story, giving it ground in reality even though people are living in the clouds (literally) and talking to cats! Bridget Tagwynn is one of those people and she is such an interesting character. Of a lower status than those around her, but with training in how to be a strong human being, and an understanding of how people interact and react she is just a great shining example of a strong female character that isn’t hateful or bitter. All the characters are interesting, have depth, have things I liked about them and had things I rolled my eyes about, because they are human and have a reason for being part of the story.

I’ll dare say I enjoyed this cast of characters to a greater extent than the cast of the Dresden Files. Not because I now dislike Dresden, but because this series has a wider cast of strong main characters instead of just the select few in the Dresden series. From Gwendolyn Lancaster who is a little too enthusiastic and know-how when she first arrives for training at the Academy to her cousin Benedict Sorellin-Lancaster who seems a steady sort of person, but manages to have depth as well, to Rowl, a cat, who manages to be helpful and unhelpful all of the time. A really interesting play of people and story line, masterfully told.

But I attribute my ability to read this high fantasy story with greater ease to the voice actor Euan Morton. He did an amazing array of voices and I easily followed a wide cast of characters trotting across and unfamiliar landscape. His Rowl voice is literally stuck in my head, it is that good. I really recommend this audiobook, he is a wonderful voice over actor.

There is a lot to this story that I can’t even fully get into with a review, but I would suggest it for anyone who enjoys strong characters, both male and female. and for people who enjoy adventure romps that have depth. Don’t be put off by the high fantasy, steam punk aspects, or talking cats, this story is more than the fun  setting it is about the very real and interesting characters that make up a group people who are trying to accomplish something together.