Mousing Mingle– Disney Fans looking for love need look no further. Yes, this is a thing and it is kind of adorable. [via The Mary Sue]

Reasons Why My Wife is Crying post by Aaron Gillies is awesomely funny . His wife sounds adorbs. Also, please note he got her permission before posting, so she doesn’t mind being viewed as someone who cares about all the feels. Spousal permission before posting is important, I’m still trying to convince my husband to let me post the video where  I try to tickle him with my feet and get stabbed by a fork for the effort. His stop-tickling-me-laugh is just too ridiculously cute to not get on video. Since I’m the one who looks like a brat, I don’t know why he’s having issues. (Don’t worry, I’ll keep working on him.) [via Bored Panda]

Don’t Forget Doctor Who themed tee glows in the dark and is too awesome for words! This website has some other awesome nerdy tees that are sure to make your geeky heart pitter and patter. No I didn’t get compensation for this, but I should have. Please, give me the thing! [via TeeTurtle]

Gah. I have never felt so overwhelmed, except when I was studying to take the bar. But it is Self Care Saturday and I am doing all the things that I love that I haven’t been able to do because of all the overwhelming things. I’ve gone through a lot of audiobooks that I want to write up and I’ve seen great things come across my Facebook and Twitter accounts that I want to share as well. So here goes my attempt to catch up on my nerdy business. And go.

They are making a GD TV show about the MAGICIANS by Lev Grossman. Go to the link and watch the official trailer. Now. (via JohnMichael)

OK. I will assume you’ve seen it. AAAHHHH! I can’t even. I want to quit all the things and find the episodes that are in production and binge watch them and force them to make more!!!! Why is it not 2016 yet???

What if Game of Thrones was Disneyfied? Would it look like this? (via George Takei)

Speaking of George Takei if you are not following him on Facebook. You really should be. He posts some amazing things that are sure to make your little nerd heart pitter and patter.

This next video is about two people who were given special effects make-up to show themselves and their soon to be spouse what they will look like over the next 70 years. It is a very amazing and heartwarming video that had me shedding more than a few tears. (via Tara Dee)

And you just gotta love the following hot chocolate mug even if you aren’t a huge basketball fan. It is just so cute! (via Loretta Milan) 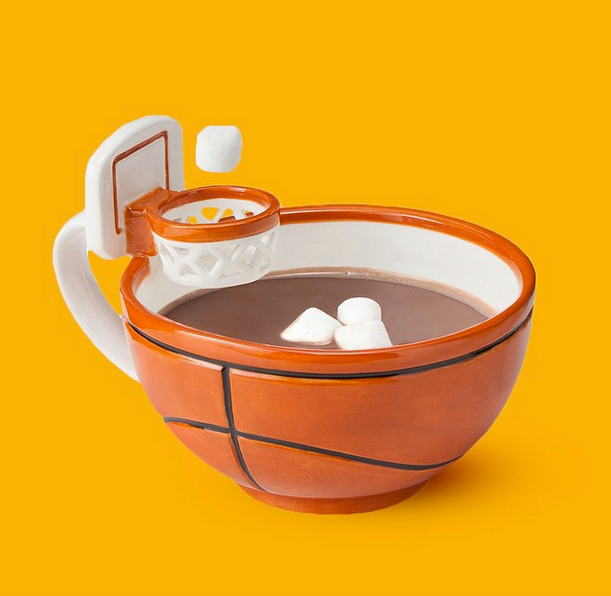 José Rodolfo Loaiza Ontiveros’ work Profanity Pop is as thought provoking as it is profane. It makes me feel like the heathen I am when I laugh at these sacrilegious images. You can click on the link above to see more of his work. I’m just posting one of my favorites below, and one that is not as risque as some of his other work. (You have been warned.)

I haven’t done a Nodds & Nends post in a long time. But here are some random things I want to share. Please check out the links below for some more internet funs and finds.

Recently I was browsing through Freshly Pressed here on WordPress and stumbled across a wonderful blog called The Book Wars. You should check them out. It is four book warriors who write reviews and discuss books in their posts. I got drawn in by one of their Cover Wars where to definitely judge the book by the cover. You can check out this one for a fun read on the different covers for Cinder by Melissa Meyer.

Don’t forget to vote for my friend Pierce and his dream job. He only has a few days left to garner votes, and every single one helps! You have to set up a profile so you can vote every day, but there were a lot of problems with hackers before, so it is worth it and then Pierce gets a chance at his dream job!

First a friend on Facebook posted to her and then I saw her photos popping up on Pinterest. Check out the fairy tale photography of Margarita Kareva. The White Wolf is my favorite. Stunning. Simply stunning works of art. 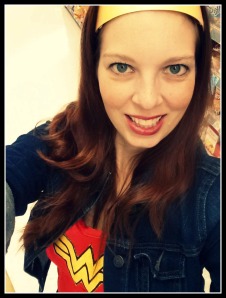 Just like DC’s Wonder Woman, I went as several Wonder Woman incarnations last night, my second time trick o’ treating in my entire life. I grew up extremely conservative, and while as we got older my parents were a bit more relaxed and we went to church harvest parties, we were never allowed to actually go trick o’ treating. So, the first time I went trick o’ treating was a few years ago with my friend and her daughter. Last night marked my second time to get dressed up, go door to door, and  watch little kids dressed up in costume get handfuls of candy. Don’t worry, I got some candy too after we went through my niece’s bag of candy at the end. She graciously handed over the candy she didn’t want and one good piece per adult.

Last night was Chris’ very first time trick o’ treating. He also grew up extremely religious, believing that it was the devil’s holiday. He remembers going to stores on Halloween night when he was a kid and the clerks would offer him candy, but he would have to refuse saying his family did not believe in Halloween. Even when they tried to assure him that it was just free candy, he would walk away without any. Unfortunately, I don’t have a picture of him, but he wore one of his monster shirts. Below is a picture of my sister and I with my niece. 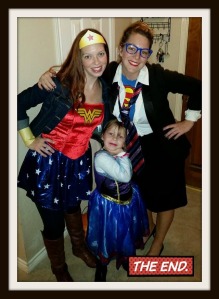 Check out Nerdist’s posting on cartoon characters in nerdy Halloween characters as imagined and drawn by Isaiah Stephens. Check out his other work on DeviantArt and Tumblr. Such as his imaginings of the Magic School Bus Kids All Grown Up. Some amazing artwork here folks! But my favorite so far is his Mulan as Xena, so much nerdy girl warrior goodness I’m about to explode!!! 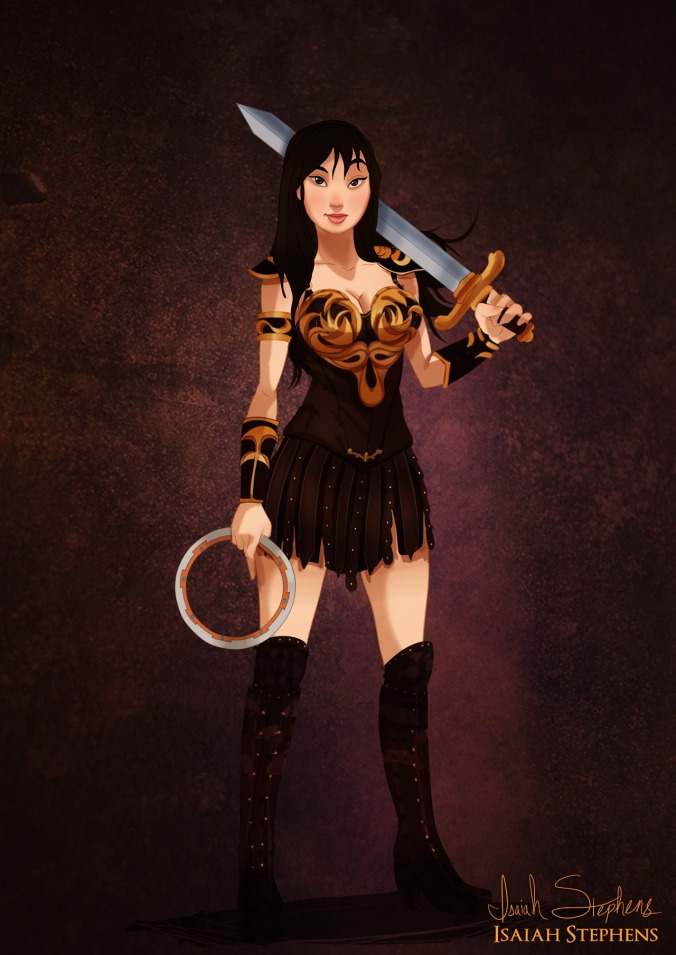 Have you all seen this? Disney Princesses as Game of Thrones characters, woot for a great geeky mash-up. I’ll admit I probably don’t get all the nuances because I have a cursory understanding of the characters, but mash-ups will always equal awesome in my mind and these are some really pretty ones to boot. These beautiful illustrations are the result of DjeDjehuti on deviantArt. [via The Mary Sue]

Thanks to Sara for sending these my way. Sara you are right, seeing Belle’s side boob is very strange.

I have a Pinterest board title Disney Done Right. You should follow it. I put a lot of cool Disney Mash-ups and other fairy tale like things on it. Here are some recent finds:

Bell and the Beast by Lehuss on DeviantArt.

Baby Belle and the Teddy Beast. It is as adorable as you think it is.

Speaking of babies, Baby Ursula is just too cute for words. I mean, Gah!

Is Prince Charming really a name? A funny strip about the Disney Princes.

I like the concept of this piece of Ariel trying to sew her legs together to be a mermaid again. Though the artist has a bit of a ways to go when it comes to faces.

What does the fox say? Robin Hood has an answer.

While not the best at lip syncing, these cute singing boys decide to start a boy band after the Disney Princesses dump them. (Basically they remix the well known songs for each prince/princess.) I’m pretty sure most of these boys would rather be dating drag queens than actual princesses, but the song remixes are cute and the dancing is fun. (Thanks to JohnMichael S. for the tip.)

The Little Prince is getting remade into an animated movie with some interesting big wig names being thrown around as the Voice Actors. [via Stephanie]

I love moving art, and when the subject is Little Red Riding Hood, I’m absolutely thrilled. Red Riding Hood is one of my favorite stories, along with the Three Little Pigs. . .  perhaps I have a thing for the big Bad Wolf. 😉 (That’s a Doctor Who reference, fyi.) [via Lily Wight]

Or perhaps it’s a fascination with death and skulls because I’m in love with this Dia de los Muertos art work. [via Lily Wight]

I read an interesting post the other day after stumbling onto it via tumblr, a professor answers a question about FanFiction by assuring everyone that it is literature and has been around for a long time.

Shakespeare doesn’t have a single original plot—although much of it would be more rightly termed RPF—and then John Fletcher and Mary Cowden Clarke and Gloria Naylor and Jane Smiley and Stephen Sondheim wrote Shakespeare fanfic.  Guys like Pope and Dryden took old narratives and rewrote them to make fun of people they didn’t like, because the eighteenth century was basically high school.

Speaking of Shakespeare, check out this post on Flavor Wire which claims they can tell a lot about you by which play of his you like the best. Personally, I don’t think I’m an *unabashed* romantic (I’m very much abashed by it), but I’ve definitely worn glitter. Thanks to Sara H. for the tip!

People are constantly mistaking me for someone else. I have people wave to me, whom I do not know, all the time. And it’s not because they are trying to hit on me. It’s because they think I’m someone else. One day last summer a guy on the train kept eyeing me and smiling smugly and texting his friend. I sighed.

When he got up to leave from the train he goes, “Hey, Darcy.”

Subtext: Bitch I see you there, don’t pretend you can’t see me.

I looked at him over the tops of my glasses. “My name is not Darcy.”

Subtext: Douchebag, don’t call me Bitch, you don’t know me. (I do have an aunt named Darcy, so I was confused for a split second, but I don’t really look like her. And I see no possibly way he knows her as she lives in upstate New York.)

He got of the train in a huff all embarrassed. I guess he was trying to prove something, all he proved was that he is a jerk. Everyone on the train watched the exchange and caught the subtext. He wasn’t that subtle, and I neither was I. The doors closed and everyone around tittered at his brashness turned embarrassment.

But this kind of thing happens a lot. Not so much now that I dye my hair red (and it’s one of the reasons that I do), but apparently I have a couple of dopplelgangers out there. And I’m not the only one. A photographer in Quebec hunts down and takes pictures of unrelated look a likes. It’s eerie. You should check them out.